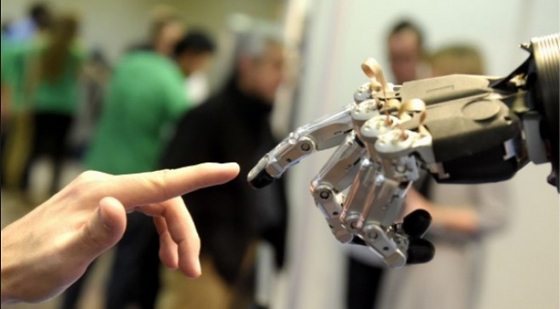 The rise of automated journalism, J-bots and variable digital media has driven many traditional news readers and journalists crazy, at least some of us. Sorry to pigeonhole, but many younger consumers do not appear to mind at all, and media organizations which used to employ real, human journalists, have been forced to adopt content services that radically reduce production costs and times, focus and shape content based on user data preferences, all of which has fueled expected controversies over what real news and verifiable information are. To be blunt: Hundreds of thousands of unemployed former print journalists and marketers will tell you that print now follows digital around like a long, lost — and replaceable — puppy dog. 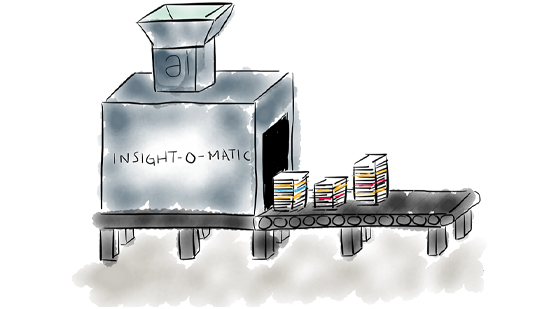 Illustration Credit: Automated Insights
Among many emerging software companies that offer application services that automate writing and other content creation is Automated Insights and Wordsmith, their “platform for automated, personalized writing.”

While automation software kinks might churn out articles and content that don’t sound or read quite right — remember the HAL 9000 computer that illogically started singing “Daisy” in the 1968 movie classic “2001: A Space Odyssey”? — fewer and fewer readers or content consumers can tell the difference between a human-written piece and a computer-generated article.

Advocates of greater automation — in public media, corporate annual reporting and many other arenas — argue that dramatically reduced costs, enhanced accountability through tracking, and simply “giving consumers what they want” represent at least three compelling reasons to keep pushing the mediabot revolution. Many in the automation industry talk about the ability to “turn up the satire or snark” in an opinion piece, or “turning down confrontational language” in a human interest story. Automation particularly appeals to advocates in the statistic-heavy professions of financial and sports reporting, as some applications can spit out as many as 2,000 stories per second, complete with art, charts, graphs and video. Except for input work and writing new software to produce even more content, no human being can do that.

Opponents say that automated content reduces the human element, diminishes important serendipity in terms of what media we read, watch and engage in, and that we are increasingly seeing damaging effects of constantly data-mining ourselves and fellow human beings through: 1) our digital devices that are produced and networked by large telecoms and Internet service providers; 2) through our use of social media like Facebook, Twitter and nearly countless others; 3) through the exploding growth and use of free gaming applications that burrow their way into all our devices and track virtually every bit of our personal data; and 4) through online retail giants such as Amazon, Alibaba and many more, which track our digital information, relaying back the “who, what, when, where and why” of our lives.

It is clear that education is changing, as it always has and will. But few would argue against thinking that the Internet has changed education most quickly. Massive Open Online Courses, or “MOOCs,” have been around for at least a decade, perhaps made “institutional” by “edX”, the free online college course web site mutually created and managed by the Massachusetts Institute of Technology, Harvard and California-Berkley.

But now comes “The End of College,” a book by Kevin Carry, an American higher education writer and policy analyst. Many are describing the book as utopian, because Carry envisions free education societies where people of all varieties worldwide gather, most often online and in-person considerably less. Carry argues this “University of Everywhere,” will replace the traditional college experience of living and attending class on campus.

Economics will push many students away from traditional college and toward online courses, as average national student and graduate debt tops more than $30,000. As much as education has changed and continues to, it’s difficult to imagine a world without traditional universities and colleges, which run deeply with the American mindset of families “raising themselves up,” and companies and institutions which still place high stock in college graduates. (Plus: College football still needs a home, right?)