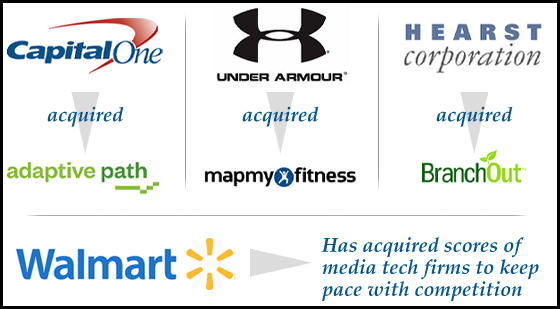 Need The Talent? Buy The Company!

As heads swirl over the growing number of media acquisitions in 2015, last year’s predictions for these trends have proven true and then some. Although federal regulators rejected Comcast’s recent bid to acquire Time-Warner, now Charter wants Time-Warner, — and will likely get it.

I’ve found VentureBeat’s acquisition page with clearly marked abstracts topped with headline links pretty well sums up a media buying trend that has not happened since the last months of the Clinton administration. We all hope innovation drives this trend, and not “buy this week and sell the next” approach among those who stand to make solid dough, especially paper dough.

Not Just Tech Is Buying Up Tech
Not only have tech companies come after boutique media companies in droves not seen since 2000, traditional companies are continuing to beef up media talent they don’t have internally, and simply buying companies that do have the talent. Call this latter trend of “tiny tech acquisition” ongoing preparation for The Internet of Things.

According to Jacob Mullins of Exitround, today we continually have big, strong companies clamoring for relatively small buys (under $100 million):

Do You Take Your Yogurt With New Media?
“UnderArmour acquired MapMyFitness. Hearst acquired BranchOut. Capital One acquired Adaptive Path. Walmart acquired over 15 tech companies in the past four years. There are more corporate buyers in the market than ever, and as detailed by The Economist, “25 of the 30 firms that comprise the Dow Jones Industrial Average” which include everything from The Coca Cola Co. to Caterpiller Inc. have a corporate-venture unit. Even Chobani, the Greek yogurt company, has a tech incubator. These are all attempts to assimilate technology into the businesses of large companies whose core business or focus is not technology.”

But we still have large tech and media companies going hard after smaller tech companies, again according to Mullins of Exitround:

“2015 Will Be The Year Of The Tiny Tech Acquisition” 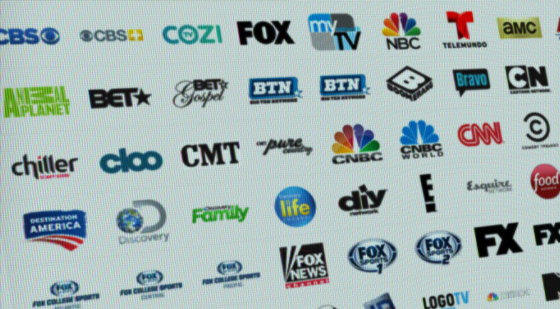 While it’s hard to tell the difference anymore with media evolving all over the place, giant telecoms — with likely all of them jumping into the Internet bundle market to compete with the digital programming successes of HBO and Netflix — are beating up dinosaur cable companies so badly that many of the latter will do practically anything any more to stop customers from jumping ship.

Cable originally came to most of us during the mid-1980s and later. Cable broke the four- or five-channel model that most Americans watched practically since the early 1950s. We welcomed cable, which instead offered us 24-7 content with a lot of good and bad channels: the sports we liked (ESPN); the news machine we really liked and really hated (Rupert Murdoch’s Fox News); the news we scoffed at and now feel sorry for (Ted Turner’s CNN); at-times revolutionary but largely inane music videos (MTV); and specialty raunchy but wry content (David Chappelle and Comedy Central).

But over time, bad cable channels have greatly outnumbered the bad. Bruce Springsteen’s 1992 dirge, “57 Channels And Nothing On”, dates me — but well illustrates the point.

Most of the country’s viewers are still comprised of people too lazy, too scared of change, too fearful that something will go wrong and waste time, or just plain too damn busy to switch away from a model that grants cable companies nearly regional monopoly status. These cable companies still earn astronomical profits as practical “cable annuities.”

Count me among the sheeple still paying into the cable annuity monster. But I — along with millions of us, blessedly — am increasingly converting to the Internet bundle world of watch-as-you-want, when-you-want, at monthly rates sometimes considerably less than 10 percent of standard cable. Tens of millions now pull up “Game of Thrones” on HBO, along with “House of Cards” and the enchanting “Peaky Blinders” BBC series on Netflix, whenever they want.

Many have labeled the shift away from cable to Internet program bundles as “cord cutting.” Some lament the dizzying array of program offerings, among them the great Tim Wu in “The Dreaded Bundle Comes to Internet TV”, from the May 3, 2015, New Yorker.